When the Stars go Blue

When the Stars go Blue 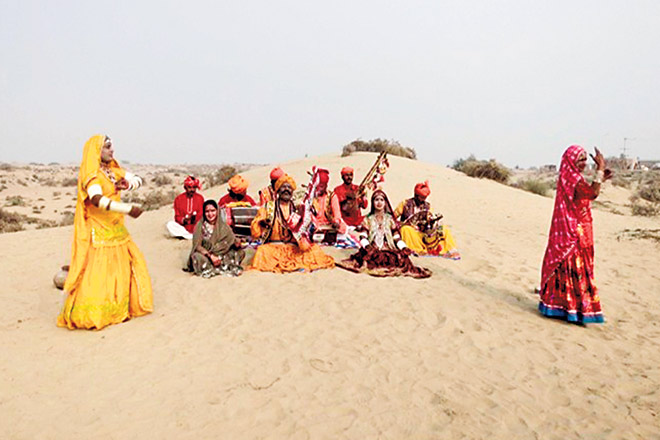 With his award-winning documentary Indus Blues, director Jawad Sharif asks the important question about the future of culture, music, tradition and how this regional heritage is disappearing.

As this piece is being written, Coke Studio 12 is getting ready to begin, first starting with a solo hamd featuring Atif Aslam. A safe bet. His presentation of the original (by Ustad Nusrat Fateh Ali Khan) will inevitably be visited by his millions of fans.

Often dubbed by its creators ‘Sound of the Nation’, the music-TV series is of particular importance to people living abroad. To them it is a depiction of some form of ‘cultural cohesion’, folk, classical as well as contemporary and therefore the show tends to enjoy a ubiquitous following in Pakistan and beyond.

Though it is not Coke Studio’s fault, this is far from being true – even as the show continues to make room for traditional artists.

The gloomier truths of traditional/ folk music – told honestly and intimately with great care exist in Indus Blues, a documentary made by Jawad Sharif in 2018 that is still finding home on the festival circuit as well as multiple events in Pakistan. It is the opposite of Coke Studio; Indus Blues will tell you that the folk artists, languages is disappearing along with craftsmen who create instruments and to whom these stories and craft has been passed on from generation to generation. Not all traditions are the same but the integrity with which they have been guarded and passed on is something to marvel at.

Executive produced by Arieb Azhar with direction by Jawad Sharif, Indus Blues opens with a dedication, “To the folk musicians of Pakistan who have dedicated their lives selflessly to their musical traditions.”

In Indus Blues, folk musicians with distinct traditions get a rare chance to tell their stories and director Jawad Sharif – who has been winning awards for his doc – has gone above and beyond, both figuratively and literally to capture as many stories as possible. In a sense, he has archived what once thrived and is now languishing in rural spaces, with no end in sight.

Running just over an hour and 15 minutes, Indus Blues is gorgeous as it takes us to old structures, sparse lands, dilapidated at times back and forth.

The story opens with two men playing two separate instruments. Soon enough, surrounded by a group of young men, the musicians are told that they can’t be allowed to play music in this vicinity as it affects the environment poorly. In fact, the creators of the documentary explain that they are simply making a documentary and have gotten the right authority to record here. Farhan Bogra (Khumariyaan) makes an appearance, trying to convince the men; the destination is KP. The men are not convinced as Arieb Azhar intervenes, politely, and tells them that he (the man playing a mournful piece) is the last Sarinda player left in Pakistan and if we don’t document him, it will be an injustice to our culture. One of the young men retorts, almost laughingly as if the idea is so absurd it merits laughter: ‘This is not our culture.’

And so begins the story of our own blues and the tussle between music and society. The Sarinda player notes that they (the majority) have finished the Sarinda; another man admits that only a few people here think it is acceptable; he goes on to add that the religious-types already say it is evil, wrong and haraam.

From Sarinda, Indus Blues moves to the only Sarangi player, whose anger seeps through the camera, when he says eventually we will be showing future generations pictures of what a Sarangi looked like in books and who was the last Sarangi Nawaz of our country.

An older gentleman says it like it is. He says this is what I’m trying to tell you – music is not valued in this country. Behind him are instruments like an acoustic guitar, a rubab and you know that at least he values it. “It’s barely surviving,” he tells us the grim truth.

Another musician, Fakeer Zulfiqar, who plays an instrument called Boreendo notes that artists/musicians cannot be stifled by boundaries as he walks in the sand, the camera following his every movement. He further reminds us that artists, musicians belong to no country or race. “They are free souls around the world. So are we.”

He plays an instrument except the sound is distinctive. Before playing a piece with what is a Boreendo, sitting in a boat and later walking through an empty stretch of land in Sindh, he admits that they – the musicians – have become trapped by societal norms.

We learn that Boreendo, it is said, was founded in Moenjodaro, Sindh and a similar instrument called Ocarina is found in Asian cultures.

To play a Boreendo, you need one and as Zulfiqar tells us, it is made by Allah Jurriyo Kambhar, a specialist Boreendo craftsman. The latter admits he has been making them for the last 20 to 25 years and learned the craft many moons ago. We learn that while making clay pots is easy, making a Boreendo mouthpiece is difficult because it is so small. And here’s the kicker: no one else knows how to craft it. In other words, these various traditions could come to an end if we don’t respect, archive, provide funding, record them and promote them.

In Goth Khamisu Khan, Sindh, a rural landscape, we are introduced to an Alghoza player that plays an essential role in Sindhi music and has local traditions attached to it. These are not just instruments; these are narratives that have been carried on through time and have gotten lost in the age of misinformation. We meet Akbar Khamisu Khan, who is the one Alghoza player left; his Alghoza, he tells us, is crafted by a man called Ibrahim Hajano. All this is happening in rural village settings and not the concrete jungle the urban cities have become.

Hajano tells us that Alghoza was previously called ‘Pava’ in Sindhi and it took him months to learn how to craft one. With an Alghoza, special care is given to the length and circumference of the pipe and it is then crafted together; it can take a day to craft a pair. The tuning of this string instrument can take 15 days.

Indus Blues journey moves to Umerkot, Thar with its sparseness calling out, which is the home of Sattar Jogi, a Murli Been player. He says that you can find several instruments around the world but you won’t find a Murli Been for sale. You will only find it with Sindhi Jogis who will never sell it. With an experience of 20-25 years, we learn that the tradition of classical players has gone extinct; only semi-classical players exist now.

The magical and majestic Mai Dhai, identified as a folk artist, singing in yet another rural landscape with children playing around and women looking on from structures made of anything but concrete, appears and soon one is momentarily lost in her voice in ‘Murli’.

As the learning about our own culture continue – we end up in Mubarak village in Karachi and learn that the most special wood for crafting an instrument is the deodar. We are introduced to Mumtaz Ali Sabzal, a Balochi Banjo player and craftsman. He reveals that to make one Balochi Banjo ready, you need a month and a half – at minimum – when it is crafted properly.

Jawad takes us through various spaces across Pakistan and giving it all away would be unfair. Think about all these people and you wonder what is happening to the real culture and traditions that reside within Pakistan and that have been here for generations but seem to be on their last leg with no attention paid by anyone – barring Lahooti Live Sessions and Lahooti Melo that gives them a chance to be exposed to a larger audience. Just as classical music has patrons, this folk music too needs patrons or it will die – make no mistake.

As the documentary goes on, we learn about instruments such as Chardha, Suroz, Raanti and those who create them.

A rural artist is different from an urban artist with one being completely immaterial. I speak from experience. Perhaps the bigger question is why one is archived and the other is not? An urban audience is not the only thing that needs to be kept in mind when thinking of arts and culture and what Pakistan has to offer. And it is prejudiced to think the audience cannot grow. Indus Blues is a dynamite of a documentary that makes you realize how little you know about your own culture, all the while listening to corporate-pushed music.