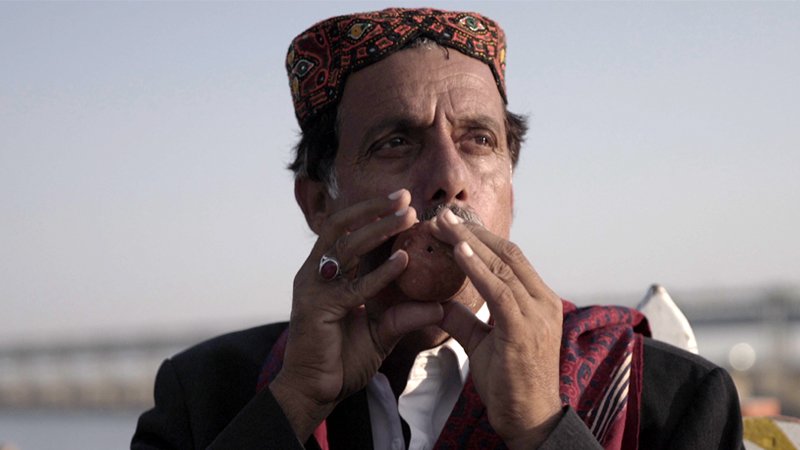 As Indus Blues documents the struggles of Pakistani folk artists in keeping their art alive, a saroz player from Balochistan says, “When peace and love die, then who cares about music?” This idea sums up what director Jawad Sharif wants to talk about in the documentary. It takes us through all four provinces, examining craftsmen and artists who are the last generation to create and play indigenous instruments including the boreendo, alghoza and others.

Indus Blues begins on an impactful note. We see sarinda player Ejaz Sarhadi and his trumpeter son performing on the stairs of University of Peshawar. The performance is interrupted by a bunch of locals who object to it. When Arieb Azhar tells them Sarhadi is Pakistan’s last sarinda player alive and that “it would be an injustice to our culture not to document him”, the protestors respond, “Nahi, yeh humari saqafat nahi hai (No, this is not our culture).”
This attitude is one of the several causes of folk music’s slow death in Pakistan. While the mainstream music industry is thriving, thanks to corporate sponsorship and branded platforms, folk music is on its deathbed, with no one to reach out to. Indus Blues is that last cry for help before its Last of the Mo’s fade into the sunset. At the requiem of folk music, artists are playing their own dirge.
Sharif doesn’t delve deep into specific issues plaguing folk artists but presents an overview of their struggles. Well shot but blandly edited (aerial shot, instruments, players and end with another aerial shot to move on to the next one), the first half of Indus Blues feels like a catalogue of instruments, their players and craftsmen – like a train stopping at multiple stations. As a viewer, one becomes very conscious of the director’s presence.
Despite this, the documentary maintains your attention as it’s sprinkled with musical performances (including that of Mai Dhai). While at points you are engaged in the folk soundscape and wide landscape shots, the director abruptly brings you back to the condition of these artists. He himself doesn’t do the talking but lets the artists speak for themselves. We see a craftsman lamenting his mentor’s death, a folk musician whose son refuses to play the indigenous instrument because it doesn’t pay and an alghoza player whose fellow villagers equate a musical instrument with the devil’s trident.
The entire picture is formed. With no institutional support for folk artists and the religious and social pressure mounting, folk music has been left to fend for itself. Craftsmen barely earn a living making instruments and folk artists rarely get paid to play. Hence, their offspring would rather play a guitar instead of a sarangi. Indus Blueshighlights how foreigners have taken an interest in eastern classical while we have adopted western music style.
It also highlights the attitude of religious clerics and terrorist attacks (especially in Balochistan) that have further hurt the folk music tradition. Meanwhile, another musician shows how the sarangi has an Islamic arch in its neck and question how such an instrument can be un-Islamic.

Saif Samejo and Faqeer Juman Shah share their views on the state of folk music as well. Sharif inserts a few memorable pictures. We see an interesting shot of a musician playing the sarinda on a rooftop with the noise and movement of the city in the background. The music hasn’t faded into the noise yet. Later, a musician plays an instrument in the deserted area with no life form to witness it. Yet he keeps playing. “Two things will never die: Love and music. They will live forever,” an artist says in the film.

Despite no sign of survival of the legacy, their hope isn’t dead.