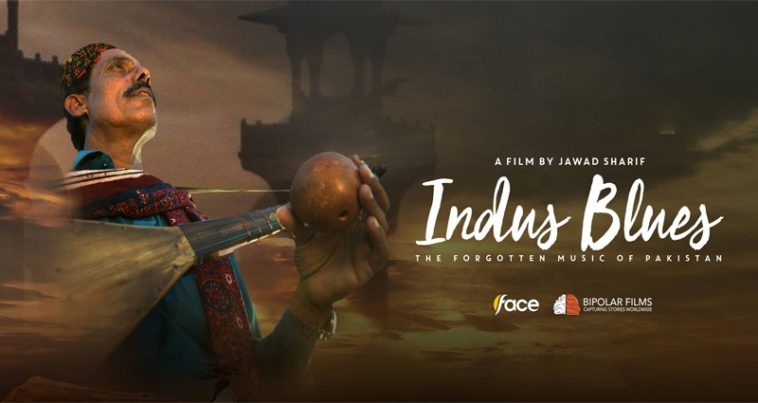 When we were entering the hall of PNCA, for the Pakistan premiere of this documentary feature, “Indus Blue: the forgotten music of Pakistan”, we were hoping for a documentary that would mainly highlight the dark side of diminishing folk music scene in Pakistan and will only shed light to all the factors that are and have been causing the death of already dwindling folk music in the country, besides introducing us to some unfamiliar music instruments.

“Wolves and swines cannot understand music”, a local artist from Sindh quoted Shah Abdul Latif Bhittai’s saying while describing the possible reason of why not everyone around them is entitled to appreciate their art. “Kabhi Kabhi lagta hai yeh (music) aik samander hai or mai abi iskay kinaaray tak nae pohncha“, says Gulbaz Karim, a ‘chardha’ player from Karimabad, Hunza. “Music frequencies are changing and when they change, they change the soceity”, says Nighat Chaudhry, a reknowned Kathak dancer while explaning how western or modern music is one of the factors of changing behaviours of people all around. And when Ustad Ziauddin, a sarangi craftsman asserts, “There are only two things that you cannot see but you get to have a firm believe on them; ‘God’ and ‘music’ ”. With all these and many other such meaningful words by various instrument makers and local artists, you soon realize that you are in for something that will serve for both as food for thought and soul.

From Umarkot (Thar) for ‘Muli Been’ to Lyari (Sindh) for ‘Benjo’, from Sui (Balochistan) for ‘Suroz’ to Rahim Yaar Khan for ‘Raanti’, and then from Karimabad (Hunza) for ‘Chardh’ to the walled city of Lahore for ‘Sarangi’, the Jawad Sharif’s documentary takes you to a ride where you are first mesmerised with the enchanting tunes in the captivating landscapes and then when you are fully spellbound to the audio-visual world it creates, it then introduces you to the instruments in the words of the craftsmen who are carrying this heritage from generations.

There you see pride in their eyes when they tell you of tales about their ancestors and then at once, the distress for the future of their heritage takes the place of pride that was right there in their eyes and voice, a moment ago. As being the last one in the chain of succession, they have a lot to tell you. There are moments when their innocence and dedication would make you smile, then there are moments that can make you laugh out loud for the amusing incidents they have to offer but in the end what prevails is the alarming fact that these are the last of their families. This thought keeps haunting you for hours after watching it and you cannot help but naturally think of what we are about to lose. You want to believe that the damage is still under control and there must be ways to restore all this exquisite folk music. But are there any? “Indus Blues” successfully leaves you agitated by injecting these questions to your sub-conscious.

This beautifully shot documentary feature has its heart and soul at its right place and it deserves a commercial release in cinemas throughout the country. Not just this, the government authorities and PEMRA should come forward, just like they enforced the channels to broadcast those torture to ears Dams fund raisings advertisements, should also direct all NEWS channels to telecast this documentary feature to create awareness among all before its too late. But are we really right to expect so much of this in a country dominated mainly by religion and politics? Just like “Indus Blues”, we would leave this question to you.