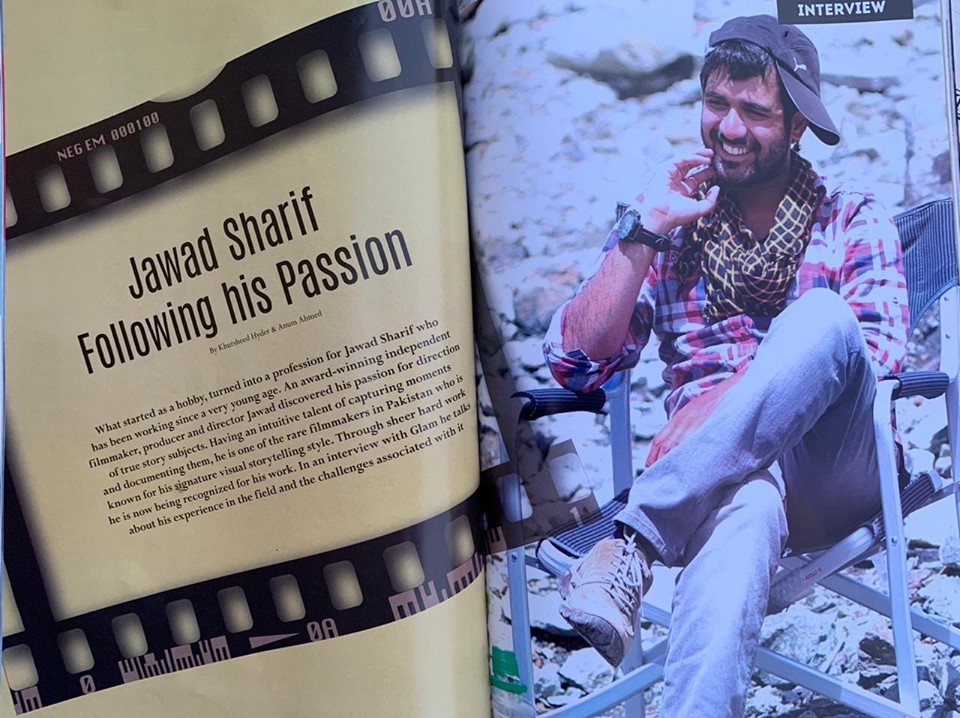 What started as a hobby, turned into a profession for Jawad Sharif who has been working since a very young age. An award winning independent filmmaker, producer and director Jawad discovered his passion for direction of true story subjects. Having an intuitive talent of capturing moments and documenting them, he is one of the rare filmmakers in Pakistan who is known for his signature visual storytelling style. Through sheer hard work he is now being recognized for his work. In an interview with Glam he talks about his experience in the field and the challenges associated with it.
Coming from a very humble background with a family who did not understand the work he was doing, Jawad through his own efforts pursued his career. He obtained a degree in computer science from Rawalpindi. From a young age he was into arts and filmmaking, web designing, aesthetics and colour. After completing his studies, he joined PTV and was surprised to know that many directors there didn’t even know how to direct. He moved to Lahore and worked with film directors Hassan Askari and Syed Gillani and learned the basic techniques and other details at the studios. He then went to Islamabad and worked for a channel as a producer for two years, and there he got the opportunity to make short documentaries of his own which were liked by directors.
Jawad ultimately found his niche as an independent filmmaker. “I always knew I would be working behind the camera” he says. Facing a lot of struggle throughout his journey he never gave up on his dreams. What sets him apart from other filmmakers is his creative mind highlighting of unusual subject of stories, getting inspiration from filmmakers such as Russian director Andrie Tarkovsky and Hong Kong film director, Wong Kar-wai. He has directed a number of documentaries, commercials and telefilms focusing on socially and culturally sensitive projects involving the topics of human rights and social injustice. Jawad points out how deeply he was affected by the surroundings and the environment he lives in filled with hostility. Working on both fiction and non-fiction films portraying the subjects he always wanted to direct, his aim is to promote positive image of Pakistan to the world highlighting its brighter side which includes tourism.
“I think the intent and the integrity of the story should be the number one priority. Creating films requires a lot of dedication and hard work, and a lot of travelling is involved when the documentaries are filmed at certain locations. Practically no filmmaker has catered to do such subjects in Pakistan,” says Jawad.”It is difficult when one is working without any support or funding, but my determination has paved the way. It is sad to see documentaries not reflecting the true picture of our society.”
Jawad has directed telefilms , TV series, TV commercials and documentaries including Indus Blues, exploring the dying musical heritage of Pakistan and the struggles of Pakistani folk artists and reminding the world the significance of art; Nabz-The Lifeline is about life after one loses a loved one in bomb blasts; Beyond the Heights , featuring the youngest female Pakistani mountaineer to climb Mount Everest ; Malala Yousafzai , how her life took a turn after being attacked; K2 and the Invisible Footmen, an award winning film depicting the unsung efforts of the porters who have facilitated the ascent of K2, Earth’s second highest mountain. After its success he was awarded a scholarships to an International Film Exchange Programme at UCLA( University of California Los Angeles ) school of theatre, film and television. He is an alumnus of the Swedish Institute and Institute Fur Auslandsbeziehunge, Germany and is also a jury member of the Jaipur Library Academy Awards, India.
Jawad’s 76 minutes documentary Indus Blues made waves and bagged the best documentary feature award at Mind the Indie Film Festival 2019 (MTIFF) in Plovdiv Bulgaria. The documentary has had multiple screenings at various places such as New York, Austin and recently premiered at Copenhagen International Film Festival in Denmark. His other documentary titles K2 and the Invisible Footmen, has been listed as one of the 14 best adventure films on Amazon Prime Video and has been screened in many countries, winning accolades at many International Film Festivals ; it was recently screened at Cinéma L’Arverne in Murat France.
Emphasizing that he still has a long way to go as he has more projects in his pipeline, Jawad points out, “People need to understand the importance and the aesthetics of filmmaking, If you have the urge to tell a story keeping in mind, pick up your camera, go and make it” For Jawad seeing a group of students taking inspiration from his documentaries is an achievement for him.