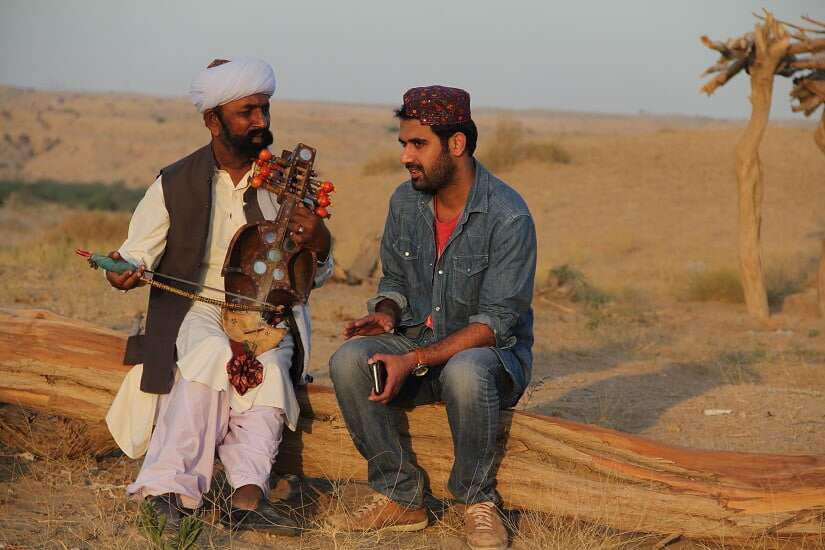 In Jawad Sharif’s documentary Indus Blues, a musician asks within the first few scenes, rhetorically, “When peace and love die, who cares about music?” It is a profoundly challenging query, one that demands the purposefulness of an answer if not the answer itself. To feel, understand and respond to music does one need to acclimatise to peace? If humans are by default violent, have they ever even known music? It might be impossible to answer this question with specificity. Music isn’t a metric, or a measurable pulse, it exists both in its rhythms and outside it. But what Indus Blues subtly suggests is that there must be a correlation between the disappearing folk traditions of yore and the rise of socio-political rigidity around the world — and not just along the Indus in Pakistan.

Sharif’s film opens not with a scene, but the interruption of one. A performance by sarindaplayer Ejaz Sarhadi, which Sharif is filming at a historic public spot, is stopped mid-way by an official. Deaf to the requests of Sharif and his collaborators, the official says, “Ye humara culture nahi hai”. The last sarinda player of Pakistan looks up, not in disgust, but with a sense of familiarity. His art, after all, is others’ memory.

“This project is very personal to me. My family environment did not encourage me as an artist. I always felt that artists in general are not respected in our society. Honestly, these were my very first thoughts that lead me to start this project,” Sharif says of Indus Blues, which travels roughly 1,000 miles (a little over 1,609 km) along the Indus river, covering arid deserts and rocky terrain, chronicling the music that emerges from them, and the lives that were spent shaping these traditions.

Through the hour-long documentary, Sharif speaks to a number of artists. Crucially, though, he also speaks to the craftsmen who create the instruments these artists use. It’s not just the man with the brush, the film says, it’s also the man who makes the paint. “In order to make a musical instrument you have to have a tuned ear. I feel a craftsman is a sort of musician. I wanted to explore their life and their reasons for choosing the background work instead of the limelight. I felt that there was a purity and devotion to their service,” Sharif says. The film handles the socio-economic condition of these craftsmen sensitively, rarely magnifying their plight to gain the audience’s sympathy. These people need listeners, documenters, respect — Sharif’s film says — not material souvenirs that see them through the lens of exoticism.

Indus Blues, Sharif says, took almost four years to complete. Evidently, it is as much about the camera, as it is about travel and research. Sharif and his team’s passion is palpable, for it must take a certain amount of restrained madness to go searching for the last of anything. The film also eulogises a musician’s relationship with his or her instrument, a brace that must hold itself up on both sides for either to survive. Unlike instruments like the guitar or the piano, the chardha or the borcendo are novelties. Not because they are uniquely impossible to make, but because they are becoming increasingly impossible to save. Indus Blues is an essay on the dying of not one, not two, but many lives.

Sharif’s film also suggests that music, principally borderless, has been endowed by privilege to the extent where it has become hierarchical. “I don’t feel that music belongs to any class, poor or rich, it’s an art. People practicing traditional or modern music are musically rich. The fault lies in the infrastructure that is highly capitalised. Additionally, in the context of our society, music is among those art forms that are a part of ideological debate. Participating in ideological conflicts has also harmed traditional music,” Sharif says.

What happens to music in a world where everything is broken — or at least irreconcilable? This is the haunting question that Sharif’s film leaves you with. “How can I forget those moments in a Peshawar university, when an extremist group of students attacked us for filming, claiming film and music are not part of our culture? How ironic,” Sharif says, referring to Indus Blues’ opening image. There is sufficient directorial flourish in the film (in addition to stunning visuals of Pakistan’s hinterland) to awe the viewer, all the while keeping him/her grounded to the prescience of the demise at hand. But what is immediately gripping, and eventually saddening, is the variety of musical cultures that have flourished along the Indus, now communicating their waning identity with poignancy. “There is no end to music,” a musician says in Indus Blues, confidently. Dare we agree?