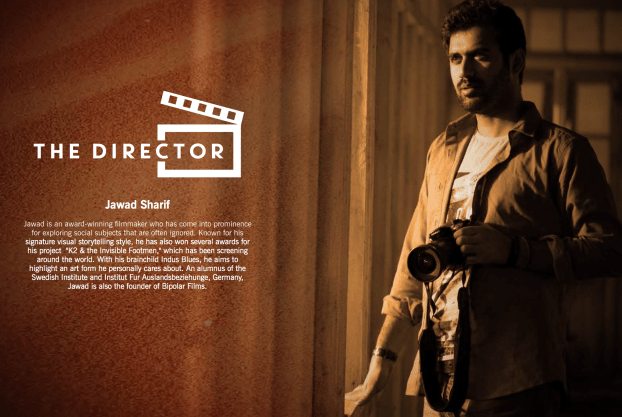 Jawad Sharif, the director and producer of an internationally recognized Pakistani documentary film, Indus Blues, in an exclusive rendezvous with us talked about his dream project.

Tell us about your documentary project, Indus Blues?

It is about our cultural music that is at the verge of extinction. We have travelled  around 50 towns in the country, from Gwadar Coast to Mubarak Village, and have picked 9 instruments, 11 musicians that have been struggling for their survival.

Was there any specific reason for choosing this topic?

This project has been really close to my heart. Unfortunately, our folk musicians don’t have a respectable standing in the society and they are refer as ‘meerasi’, despite of the fact that they are the carrier of our precious musical heritage. I want to give them a credit for making an effort to keep our cultural values alive.
Other than it, I want to create awareness in our urban generation about our musical values.

Is it nominated in International film festival?

Yes, the film has been screened at different international film festivals. It was recently showcased at Copenhagen International Documentary Festival.

How can we see it? Is it available on You Tube or Netflix?

I am trying hard for its theatrical release but so far I haven’t received positive response from anywhere. People have discourage me a lot by saying that it is not something that public demands but as a film maker I strongly believe that we are the one who creates public demand and let viewers decide what they want to see.
I am sure people are interested in watching my documentary because I have got tremendous response with its trailer release on digital space – within a day it got millions of views which clearly shows that people are interested in watching such content.
I strongly feel that our cinema owners should take initiatives to support independent cinema.

Where have you recorded your documentary?

As I just told you that we have travelled all across the Pakistan for it and we have recorded it at different places including Lahore, Balochistan, Hunza, Thar, Khyber Pakhtunkhwa, Gilgit Balistan, Peshawar , Rahim Yar khan, Badin, Kot Khameso and Mubaraak Village.

Do you think such projects help artists in getting international recognition?

Yes, we got a lot of exposure and recognition through it e.g our film got Grand Jury Award in Goa Film Festival where critics appreciated our work and called our project ‘as a voice of voiceless’.
The film has not only given us international recognition but it has also created a positive image of Pakistan all across the globe.

Did government or anyone support you to make this documentary?

Since it has been an independent project we haven’ t seek any financial help from government or any organization.

What are your upcoming projects?

I am working on another documentary which also focuses on our culture. I am also working on fiction feature project and we have already shot its trailer. Basically, I am a commercial director and all these are my passion projects.