Director hits the right note with film on folk music

Director hits the right note with film on folk music 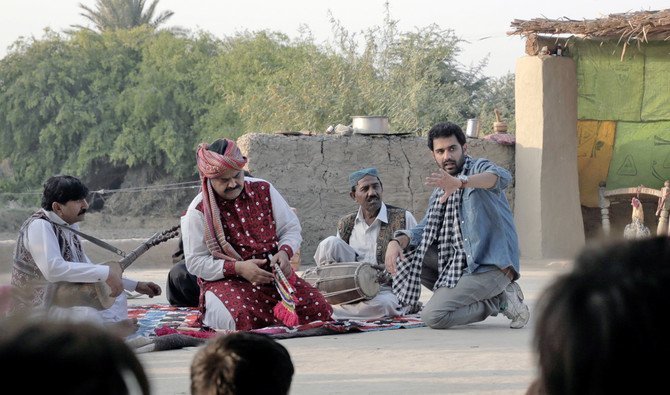 By panning the camera on the dying breed of folk artistes across the country, Pakistani filmmaker Jawad Sharif said that he hoped to unearth the genre’s “hidden gems” through his latest venture, Indus Blues.
Speaking exclusively to Arab News, Sharif said that virtuosos in the field continue to live a difficult life in Pakistan, as “being a music performer is a social taboo in society.”
During the research phase of his project, Sharif says he came across several instances of people who were of the opinion that the income earned by musicians was haram (against Islamic principles or forbidden), thereby making it an arduous task for the folk artistes to earn a decent livelihood.
“While we had a general impression about people looking down upon musicians as a lower segment of the society, we were shocked during our research about how difficult life was for them. This is why folk musicians are leaving their art form in droves,” he said, adding that this very experience forced him to create “Indus Blues.”
Having won notable awards for ‘K2 & the Invisible Footmen,’ a feature film which was screened at several international film festivals, Sharif said he was hoping to reach a wider audience in the Gulf region through his latest venture.
‘Indus Blues’ premiered at the Regina International Film Festival in Canada earlier this year and earned critical acclaim, taking home the Grand Jury Award for Best Documentary Feature at the Guam International Film Festival 2018, in October this year.

The film, which took more than three years to complete, weaves the story of nine instruments and a group of musicians who choose to face society’s harsh realities every day in order to protect their endangered craft – the very art form that has been an integral aspect of the diverse cultures representing Pakistan, along the Indus, for ages.
Through his journey of a thousand miles, Sharif takes us through the northern Karakoram mountains to the southern coastline, all the while in search of Pakistan’s folk treasures.
When he finally chances upon them, he discovers that instead of a culture that should be thriving, artistes from this specific genre of music were struggling to make ends meet as they continued to fight the odds against those who did not see the value in keeping the art alive. “There are elements in the society who are against this valuable heritage,” he said, analyzing conversations with several community members who expressed resentment for the craft.
Narrating details of one such interaction, he talked about an incident whereby his production team was moments away from being attacked. “In the concluding sequence of the trailer, a student union at a prominent educational institution in Peshawar stopped us from covering a sarinda (a stringed folk musical instrument similar to lutes or fiddles popular across the Indian subcontinent) performance, even though we had the permissions to do so, because, according to them, it was not a part of their culture,” he said.
With a desire to compel people to think otherwise, Sharif lamented that our culture would be half empty “if [we] close our eyes to our rich musical heritage.”
“In a country riddled with political turmoil, economic challenges, and social identity crisis, musicians and instrument craftsmen find it hard to survive and sustain their art. We have to share these hidden gems. The world should know that Pakistan is a home of beautiful instruments and musicians,” he said.

Previous
Review: ‘Indus Blues’ showcases dying indigenous instruments of Pakistan
Next
Sights and sounds of the Indus in trailer for documentary on forgotten musicians of Pakistan